Monday is the US Memorial Day holiday, set aside for remembering those who gave their lives in military service. For me it has additional meaning. On Memorial Day 2003 my brother and his wife were hosting a holiday cookout, and some of the young men there started playing basketball. My nephew Ryan, without warning, collapsed and was taken to the hospital. That evening it was determined he'd suffered an aneurysm, with a prognosis that included a long rehabilitation period. The next morning he was pronounced brain dead. Doctors kept Ryan alive long enough for his little brother to rush home from Iraq to see him while he was still breathing, even if not on his own. We buried him the next weekend.

I was at the time working in a small HR shop for a state agency, and office protocol in the event of a death was the gift of a potted plant. They sent a small hydrangea in full bloom, which the family gave to me and I took home. I hated to let it die so, when it outgrew its pot, planted it in a shady spot beside the garage.

That $20 hydrangea is now taller than I am. It's thrived despite my inattention and appallingly un-green thumb. It's leafy and green for most of the year, and loaded with huge blue blossoms in late spring and summer. It bloomed again this week, just in time for the Memorial Day weekend: 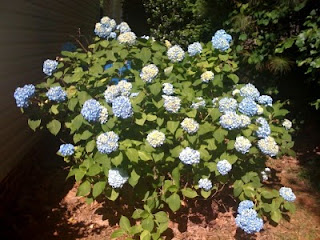 I see the plant every time I pull into the driveway. Apart from reminding me to think of Ryan, the plant -- a $20 token gift sent per policy -- represents much more. It's a reminder that little things do matter, and small gestures sometimes carry great meaning. It's a reminder of how important it is to maintain memories. I left that job not long after Ryan's death but often remember it, and my former coworkers, fondly, prompted by the view of the hydrangea.

And what I'm trying to get to: Small connections matter, sometimes in unexpected ways. I think this is why it disturbs me to hear some people who are so dismissive of social media and online interactions and distant or "loose" connections. Through social media, especially Twitter, I have cultivated a network of smart, funny, interesting people who have never failed to come through when I asked for something. My reach with some is fairly close, with interactions nearly daily; others I may directly connect with only sporadically.

Little things matter. Connections matter, no matter how they cross time and space. You can't predict in 7 years, or 20, or 50, which small connection will still be important. So this Memorial Day I urge you to take a moment to connect on Facebook, or Twitter, or LinkedIn (or if you must, the telephone or even in person) with someone perhaps not part of your daily orbit. Perhaps, as with my former coworkers, the connection will provide a fond or poignant memory on some future Memorial Day.
Posted by Jane Bozarth at 8:10 AM No comments:

Revisiting Zemke & Kramlinger's wonderful Figuring Things Out, a must for any trainer's shelf--if you can find it. On the new Training Book Review blog sponsored by HRDQ.
Posted by Jane Bozarth at 11:00 AM No comments: