We're lucky to live near the fabulous Durham Bulls Athletic Park. This ain't your usual little hometown venue with wooden bleachers, but a big, pretty, sure-fire stadium. I'm not much of a fan but my husband is, and he often goes to games by himself to catch up with friends there. One night last September he was sitting, alone, on a row behind a talkative thirtysomething couple with a young son. In the span of half an hour my husband -- the  "strange lone man" of lore -- sitting behind this family, had learned:

It's no secret that I like Facebook; I wrote 1/5 of a book about it. But apart from its usefulness as a tool, I really admire what Mark Zuckerberg has done. After a decade of struggling to drag people into online interactions, someone  popped up with a technology so appealing and user-friendly that five hundred million people voluntarily use it. (Update: Make that over a billion.) Grandmas, my high school principal, folks from my dad's neighborhood, and sometimes their dogs, all have profile pages. And while I don't always agree with the changes, I truly do admire Zuckerberg's vision. He is not just trying to build a faster horse -- if he were, he'd have yet another portal site. He is forcing new interactions, new ways of engaging, and along the way redefining the concept of "privacy". He does give users privacy controls, but they are granular and prone to rapid and frequent change, and you'd best keep up. He's tearing down the silos the rest of us just keep talking about. Mark Zuckerberg is changing the world and the way we move in it, even if we're not even on Facebook.

I'm amused by people who are only too happy to take advantage of everything Facebook offers -- including the inescapable acreage of Farmville --  yet feel they have any right to complain about anything. Let's get clear: We are not Facebook's "customers".  We are its product.  Don't like it? Close your account, then. (Or ask for your money back. That'll show 'em.) I'm reminded of the time years ago when Ted Turner, blasted for announcing that he would be colorizing old Hollywood classics, reportedly replied, "The last time I checked, I owned those movies." Like it or not, it was his to do.

I also am not in the camp that people need to be saved from themselves. It's the internet, and you can't both share information there and really expect it to be 'private'. Here's something to help clarify, from Dave Makes: 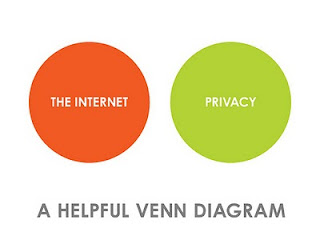 So: If you want it to truly be private, don't put it online.  Don't be surprised if you learn that someone has harvested your email address, or used Google street view to get an idea of your income, or allowed some third-party app to access data it shouldn't.  (And don't be naive: Making a call? Your phone knows where you are. Buying gas or eating at a restaurant? Your credit card company knows where you are and what you're doing. In your car? OnStar knows where you are.) Don't allow others to tag you in photos. Turn off the geotagging feature on your smartphone. Disable Facebook Places. Don't download every Facebook game and app and gift. Don't announce when you'll be out of the country for 2 weeks. If you don't want Facebook to have it, then don't give it to Facebook.

And maybe don't talk about it so strangers can overhear at ballgames, either.