I speak at many conferences and over the years have been lucky to see -- and often meet-- some remarkable presenters. I am thrilled  that Training Magazine has booked Temple Grandin to keynote Training 2017.

Wikipedia: "... an autistic American professor of animal science at Colorado State University, world-renowned autism spokesperson and consultant to the livestock industry on animal behavior. She is widely celebrated as one of the first individuals on the autism spectrum to publicly share insights from her personal experience of autism. She is also the inventor of the "hug box", a device to calm those on the autism spectrum. In the 2010 Time 100, an annual list of the one hundred most influential people in the world, she was named in the "Heroes" category."

From the online conference brochure: 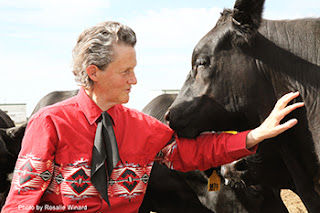 Dr. Temple Grandin is a professor of animal science at Colorado State University. Her achievements are remarkable given at age two she had all the signs of severe autism. Many hours of therapy, and intensive teaching enabled Temple to speak. Mentoring by her high school science teacher and her aunt motivated her to study and pursue a career as a scientist and livestock equipment designer.
She obtained her B.A. at Franklin Pierce College and has received honorary doctorates from McGill University, University of Illinois, Texas A&M, Carnegie Mellon University, and Duke University.
She has published hundreds of technical articles, and 12 books including "Thinking in Pictures", "The Way I See It", and "The Autistic Brain".
HBO has made a movie about her life starring Claire Danes. The movie received seven Emmy awards, a Golden Globe, and a Peabody Award.
In 2011, Temple was inducted into the Cowgirl Hall of Fame.
Posted by Jane Bozarth at 10:25 AM No comments:

A follower who'd attended my "Tips for the Positive Deviant" webinar asked on her Facebook page how ideas around Positive Deviance (PD) might be applied specifically to L&D. I answered in this month's Nuts & Bolts column.
“In every group there is a minority of people who find better solutions to the challenges at hand. … Even though they have access to exactly the same resources as the rest of the group, their uncommon practices or behaviors allow them to flourish.”—Jerry Sternin
While “positive deviance” is a fun, alluring term, it’s not about just breaking rules. The “deviance” must have a positive outcome. It’s not quite just innovation or creative thinking, though those can certainly be part of it. It’s not just a random act of kindness, like paying for the coffee of the next customer in line. It’s more about deploying uncommon but successful behaviors or strategies to achieve some better result.
While there are individual positive deviants who work alone, a key factor is working with the community to surface, spread, and sustain solutions rather than try to force outside-in answers—as is so often the case with training. … Leveraging social tools and workplace communities, and encouraging people to show their work, can help to surface and spread solutions and to sustain application of new learning to the workplace.
In 1990, Jerry Sternin, director of Save the Children in Vietnam, was tasked with finding a sustainable solution for overcoming the problem of child malnutrition. At the time, 65 percent of the children under age five in Vietnamese villages were malnourished. Prior attempts to implement solutions—such as supplemental feeding programs—did not succeed for long. Along with his wife, Monique, Jerry looked at a question that researchers were working on at Tufts: “Why, with all resources being equal, are some children in a community not malnourished?” Working in four communities, the Sternins turned to the members of poor villages who seemed to overcome the malnutrition problem and have healthier children. There emerged a group of positive deviants, the families who, despite identical resources, were able to achieve better outcomes through doing things others did not. It turned out those families were giving more frequent meals than was the custom, and were feeding items—such as brine shrimp and crab—considered inappropriate for young children.

It isn’t about imposing solutions, but helping the community surface the solution it already has

You know the drill: Organization has a problem. Organization brings in “experts” to study the problem, devise a solution, run a pilot (which may mean a training program), and then leave. Organization members quickly revert back to old behaviors.
The solution in Vietnam was sustained precisely because the solution was not just imposed on the villagers. The Sternins didn’t go around lecturing about feeding more frequent meals and unusual foods. They leveraged the help of community members—the mothers of the healthier children—in working directly with other families to spread the different practices. Ultimately, the initiative cut childhood malnutrition by two-thirds because the families sustained the change.

A quick start? Flip the question

As you saw with the Sternins, a key behavior of positive deviants is their ability to reframe the question. Instead of asking, “Why are so many children malnourished?,” they asked: “Why are these other children not malnourished?”
Other examples:
Years ago, I was working with a hospital for adults with developmental disabilities, where I supervised the staff who taught emergency response courses. All workers were required to be regularly recertified in standard first aid, and we had a terrible time getting this done. In most instances, the ever-present nursing staff handled emergencies, so other staff did not perceive recertification as a high priority. Getting people to class involved a lot of foot-dragging, endless floor-coverage issues, last-minute cancellations, and even threats. One of my staff suggested that we start adding on infant and child CPR at the end of the training day. It didn’t cost us anything, as we already had staff and equipment to do it, and by trimming down breaks we didn’t extend the day by much. It solved our attendance problem overnight, as the training was suddenly seen as more valuable to the parents and grandparents who constituted a huge proportion of our audience.
The related field of appreciative inquiry offers similar flip-the-question approaches but is more specific, asking us to look for and build on the positive case or “outlier.” Is there someone in the community already exhibiting the desired behavior? What is enabling them to outperform? What resources are they tapping into that others are not?
For more on key characteristics of positive deviants, and ideas for applying PD principles to L&D, see this month's Nuts and Bolts column in Learning Solutions Magazine.
.