What is "Good" eLearning, Anyway?

This month in Learning Solutions:

"Over the years I’ve seen a lot of lists of criteria for buying eLearning, for developing a product, and for choosing a vendor or developer. I agree we have to go in having some idea of what ‘good’ is, at least enough to keep us away from all text or bedtime-reading narration of that text, or seductive but irrelevant elements. The trick? Finding an explicit performance need, getting clear on assessments first, and sticking to a plan that helps the learner learn.”

See more at:
http://www.learningsolutionsmag.com/articles/1115/nuts-and-bolts-what-is-good-elearning-anyway
Posted by Jane Bozarth at 8:38 AM No comments:

With the 2nd edition of Better Than Bullet Points: Creating Engaging eLearning with PowerPoint (updated for PowerPoint 2013) going to press in August I’ve been busy learning PowerPoint 2013 and testing out converter tools. [Disclosure: I made it known that I was working on this. Some vendors approached me asking me to test tools; I downloaded some free trials of others.] What I’ve always needed? Quick conversion, quick upload with minimal bugs, and fidelity in capturing audio, transitions and animations, including triggers.  What I need now? All of that, compatible with PowerPoint 2013, and with reliable conversion to both Flash and HTML5.  And, with Microsoft’s unfortunate decision to take the Sound Editor out of Windows, I hoped for a product that included an audio editor, thereby keeping me to just two tools (PowerPoint and the converter tool) rather than three or more.

I looked at several products and found overall I was very happy with the iSpring Suite 6.2 and still-in-beta iSpring Pro 7. http://www.ispringsolutions.com .  I gave it quite a workout and consistently got the fast, smooth conversions I was after without once having to go play with manifest files or otherwise do any debugging.  Conversion of even big slide shows with lots of images, animation and audio is very fast. I don’t make heavy use of video but did try conversions with several video clips in assorted formats and got good results. Here's the iSpring Suite toolbar:

The player is highly customizable.  I never need 1/10 of what most products offer so it did everything I wanted although I admit to not pushing it very hard. I especially liked the ease of making choices:  unlike some other products, there aren’t a lot of default settings that are difficult to override. 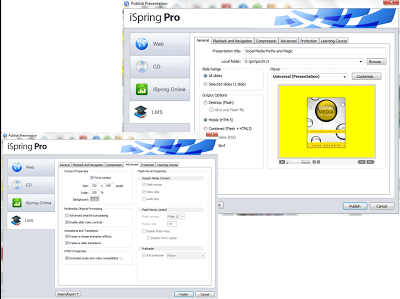 Publishing is a one-click to web, cd or LMS, and everything ran the first time, every time. I was pleased with the audio recording and editing tools and allow that it is much better than the minimal functiontonality provided by the old Windows Sound Editor.

While I’m not looking for much in the way of “authoring” outside of PowerPoint itself, the iSpring suite includes the Quizmaker and the Kinetics interaction tools so I did take them for a spin.  The Quizmaker provides options to create graded items such as multiple choice, matching, hotspot, and even text entry, or ungraded survey-style quizzes.  The Kinetics tool is limited but offers a few interactions, such as one for creating a page-flip appearance, a FAQs creator, and a nice little timeline builder (period, event, that sort of thing)  that would be tedious to build from scratch in PowerPoint.

Overall: The product behaves well, did what I need without compromise or workaround, and had no performance problems during testing. There are a few animations not yet working with PowerPoint 2013 but they are expected in an upcoming update. I’m not one to often endorse products but, along with my undying love for SnagIt, can say iSpring is worth a look.  There’s a free trial for iSpring 6.2, but I’m bringing this conversation up now because iSpring Pro 7 is currently in beta  and available to those wishing to serve as testers. See http://www.ispringsolutions.com/ispring-pro-7.

Posted by Jane Bozarth at 9:05 PM No comments: