Snagit: What's In My Tray?

I’m a longtime Snagit lover, back to my early days designing eLearning in state government with no budget. I'd tried to get by with MS Paint but had pushed past its limits. Somewhere around 2003 Snagit appeared on my radar because of its reasonable price and quickly became my go-to for many applications. It’s literally my most-used tool for years now, both for work and personal use.  Most of my books were built largely with Snagit screenshots, and I’ve mentioned Snagit in many presentations and publications. So I was delighted when TechSmith contacted me, called me a POWER USER* -- which made me feel as if I had superpowers and should be wearing a cape -- and asked if I might like to talk about some ways I use Snagit. I was delighted to be asked.

Here is my Snagit screen showing recent captures in the tray at bottom. The numbers correspond to some detail about each, below: 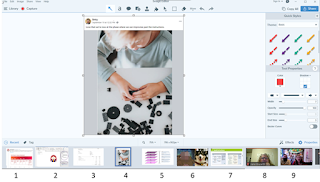 1. A tweet I used in a recent keynote presentation. I found an interesting continuum of behaviors associated with online friendships, dated 2009, and before using it in my presentation wanted to see if others felt it was as accurate/current as I. (Answer: Yes, they did, so I used the image, tweet and all.)
2. Prompts for opening and continuously running Word’s accessibility checker. A friend new to accessibility had asked for help getting started. Note that the original image contained a wide gray area between the document and the prompts at right, making the image bigger than it needed to be and making the user’s eyes jump from document to prompts and back. I cropped the edges, then  used Snagit’s “cut out” tool to remove most of the gray area the entire length of the screenshot:

3. Screenshot of an invoice for a product purchased in another country, in foreign currency, for which I would be getting reimbursed. I noticed the promised confirmation email had not arrived so thought I’d better grab this before leaving the website. I pasted it into an email to the person providing reimbursement.
4. Image for a blog post on designing instruction for novice v. expert learners. A Facebook friend posted a photo of her young nephew playing with LEGO with the caption, “Love that we’re now at the point where we can improvise beyond the instructions.” It was a great illustration for my topic but the child’s mother did not want me to share the photo. So I used Snagit to grab a picture of another child from a clip art gallery and pasted it in.
5. Image of Plaut’s Elements of Learning Experience Design to use as a discussion starter in a client meeting.
6. Side-by-side images of a cartoon badger and my dog. I don’t remember why but it seemed important at the time. Note: I went back and used the “blur” tool to obscure the cartoon image for use in this post, as I do not care to invite the attention of the many lawyers employed by the company that created the cartoon badger. Just take my word for it that my dog and the badger share a remarkable likeness.
7. Slide shared in a webinar hosted by NZATD. The presenter had developed quick aids for people suddenly put in the position of moving traditional training to the virtual classroom environment. I asked if I could share it, then grabbed this screenshot and tweeted it out, to this response: 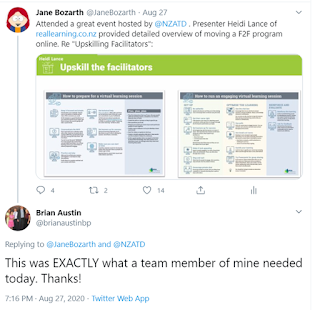 8. From the same NZATD webinar. Although I was up at 3 am to attend it, I was having a fabulous hair day and wanted that on record.
9. Photo from a Zoom-based baby shower for a colleague. I used the shape tool to block my own face from the lower right of the shot.
While there’s not an example in my tray, I frequently use Snagit for video editing. Example: After the COVID stay-at-home orders began I figured it would be a good time to pick up my banjo again and was delighted to find that the instructor who taught me when I was a teenager is still in business in my hometown. Now every Thursday morning he sends me a new lesson via YouTube. I’ve been playing a long time, even though I often lapse, so after a few run-throughs I rarely need to reference the whole video again. But I do sometimes will want to revisit an important or tricky piece, so I use Snagit to clip out that bit and save it as a separate file. This is 9 seconds of a 4-minute video edited with the Snagit video editor (video used with his permission). Also note use of the Snagit arrow tool at bottom of this screenshot: 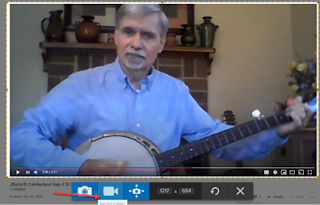 Snagit Video Editor interface
Quick clip from long video
Not that you asked, but here I am playing the same bit from the
same song a couple days later.

Note that you can also make GIFs with the Snagit Video Editor. (You're welcome.)

Snagit has been a critical part of my workflow pretty much for as long as I can remember working in eLearning. I use it all day, every day, whenever I’m on my computer. I hope my examples offer you some inspiration or perhaps highlight a Snagit feature you haven’t yet explored.

*Many power users of products are people like me who are working with limited resources. This 2018 Learning Guild research report, eLearning on a Shoestring, features successful practitioners enacting great work on tight budgets. All ascribe their success, at least in part, to a willingness to explore and practice with a tool, looking for ways it can solve problems.